Today one in the “what the heck!?”-category. I had setup a freshly installed VM with Service Fabric SDK and Visual Studio, to debug a Service Fabric application. When I ran the app from VS, it got deployed into Service Fabric, all lights green. But weirdly, none of my breakpoints in Visual Studio were hit. So I tried numerous things like checking the debug profile in VS, rebuilding, removing the application, etc. etc. All to no avail.

When I tried resetting the cluster itself, I got the following error:

Access Control Lists are usually tied to folders, but of course this very helpful error does not include the actual folder. In the event log, a number of warnings were also feature, like:

Hmmm ok… again not that helpful. I’ll spare the Google query I’ve undertaken and skip to the end result:

Add the “ServiceFabricAdministrators” and “ServiceFabricAllowedUsers” groups to C:\SFDevCluster with Full Control permissions. Those groups were not there in my case and once added, everything started behaving normally again. So not sure why they were not there, but adding them fixed everything. You’ll need to reset your cluster to get everything working afterwards. 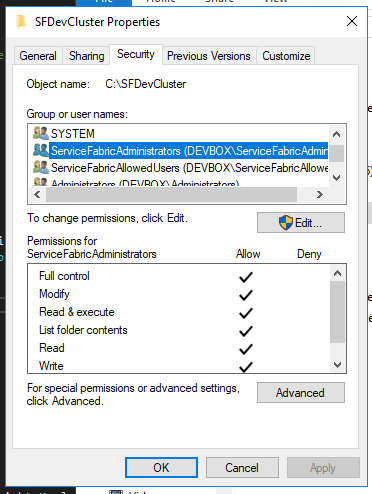 Ok. I admit this is a kind of dramatic opening to this blog post and that its contents is probably not as dramatic as you might think. But last week at SharePoint Conference Europe, it finally hit me. The SharePoint developer is no more.

Let me explain. We have all heard Microsofts message about SharePoint apps since SharePoint 2013. It’s all about apps, every developer needs to learn apps. And whether you agree or not, it does sound the bell for a new age in development land. Microsoft is pushing it’s cloud model. And when Microsoft starts pushing, you’d better move in their direction or be prepared to move elsewhere. And to be honest, this push is probably for the best.

Let me explain, again. If you are a SharePoint developer, chances are you have been laughed at by your fellow developers. You’ve always been using old technology. Your Javascript and jQuery skills were seriously lacking. You have been creating weird XML files with Visual Studio, which usually broke things without explaining why. We’ve all been there. There are not that many really good SharePoint developers and that’s because you need a certain level of persistance to get there. Not everyone makes it. People are easily intimidated by everything that can (and will) go wrong in the beginning. Life as a SharePoint developer isn’t always great, that’s just a true fact. So why is it wrong that we will move to a new model? Well, same reason people don’t like Windows 8. It’s weird, it’s new and we do not know it that well, yet.

It’s a fact that SharePoint developers will have to learn new skills when they want to keep up. You all know what I’m talking about. HTML5, Javascript, funky frameworks like Angular, MVC, and the list goes on. I’m guilty myself as well, not keeping up my web development skills. Mainly because SharePoint didn’t have those thing so there simply was no need to learn. Well, times already changed.

So why do I think the SharePoint developer is dead? Well actually, I don’t. Not yet, that is. The “yuk, SharePoint” point of sight still lives on in development land. So it’s going to take a while untill our hip webdevelopment colleagues finally find out SharePoint apps are nothing more than webapplications which use some API’s. Sure, you’re able to deploy XML’s with some lists and stuff, but why would you do that when you can also do the same in provisioning code? Code is easier to create, better to maintain and every developer gets it. So screw those XML’s. Really, apart from a different project type in Visual Studio, a SharePoint app isn’t that much different from any other web application when you take a close look.

When companies start using their normal web development guys to do SharePoint projects, those same companies will find the learning curve to be much less steap than it has been before. It’s far easier to train an existing webdev some API’s and call them “SharePoint developer”. And since there is a big market out there for those same SharePoint developers, why wouldn’t they?

When that happens, we’re done. Our app buddies will create cooler things in lesser time. They will use probably nothing out of SharePoint, maybe store a document or two via the API’s. But companies will still be happy as their apps run “inside SharePoint”, are “fully integrated” and now even look cool, are repsonsive and much more user friendly than before. Uh oh…

This was my biggest take away from last weeks conference. Whether we believe in the app model or not, it will drive change. And if that change is the best for SharePoint, I honestly do not know. What I do know, is that you developer need to start thinking about this and begin to train yourself when you want to keep up. And believe me, I have been skeptic as well, very even. But I now have seen the light and will start doing some Angular in my evening hours. Times are changing!